Preliminary remarks on the final phase of US Election 2016

Should any of you be interested, I think Trump is likely to win this election. I'm not cheering for him, mind you, but neither am I cheering for the war-criminal Hillary ("we came, we saw, he died!") Clinton. As a foreigner, I see no good outcome in the short term, and probably not in the long, unless Black Lives Matter and the renewed anti-pipeline native movement(s) can somehow coalesce in a broader, genuinely revolutionary movement with whatever remains of Bernie Sanders' supporters.

In the short run, whoever wins the Presidency, the Pentagon will ensure lots of foreign wars and lots of foreign casualties; and most likely, President Trump will prove just as friendly to the 1%, the class to which he belongs, as President Clinton.

All that said, I watched the debate with a sort of morbid fascination. Was surprised that Trump was so well-coached and impressed by his cool body language; when he wasn't interrupting, he appeared to be listening to his opponent. Clinton surprised me by being mostly fairly personable, much less stiff than I expected. But the eye-rolling and impatient smiles at Trump's more outrageous lies and innuendo probably did her no good.

No clear winner to my eyes, though; it's going to be a long couple of months. So I'll leave you with a picture. 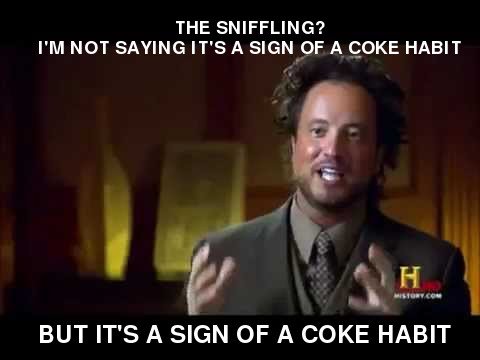 This entry was originally posted at http://ed-rex.dreamwidth.org/284720.html. Comment there using OpenID, or here as per normal.